Kelly from Easy Lunchboxes offered to send us a set to try out and see what we thought. Since we're quite big on trying new bentos, we jumped at the chance. I love the idea of a larger bento, since sometimes, we just need more food for things and the fact that the compartments are separate so certain foods can be kept away from others (no one like soggy crackers!). We've tried a couple of meals so far in them--the mouse wraps the other day and last night's taekwondo bentos. F&B were able to open them without a problem and the plastic lids & containers are much sturdier than disposable ones. Even better, they are dishwasher and microwave safe! That's actually one of my biggest complaints about traditional bentos, I prefer everything to go in the dishwasher. Ben actually chose the olive green bag above and we were able to stack two containers in it, plus drinks. I also tried an empty third container and discovered that you could stack three, without drinks, in the cooler.

F&B also liked the choice of lid colors, which seem really handy for variations in lunches. In our house, only B likes blackberries and only F likes cucumbers, so they often have almost-identical lunches. It's definitely better to be able to tell at a glance whose is whose without opening boxes. 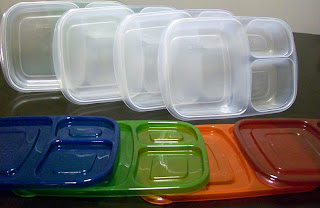 There are five colors for coolers as well. After some debate, F&B chose olive green, as long as I promised to order a second one later on. F wants purple, but I wanted one that either could use, for now (and I like green!). :o) 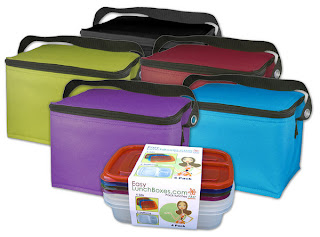 Kelly was kind enough to offer a set for one of my readers, so I bring you, giveaway #2! Would you like to win a set of boxes and a cooler for your own use?

Make sure you leave a separate comment for each entry, I'll put everything in a spreadsheet based on comment number, so make each one an individual comment on the main blog!

1. Leave 1 comment and tell me what color cooler you'd pick! I won't hold you to it, you can change your mind if you win. :o)

I'll keep the contest open until Sunday evening, whenever we get home from our Thai dinner for Mother's Day, and use random.org to pick a winner then!
bento box giveaway review 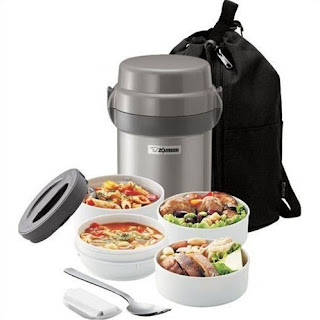